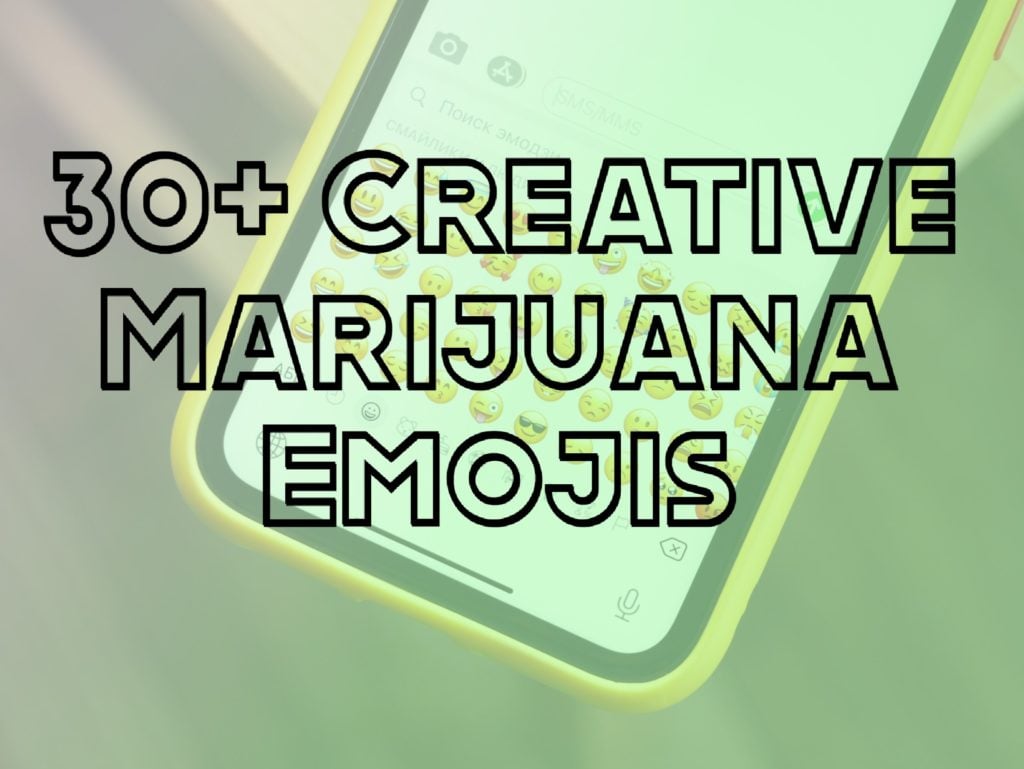 Since you’re here, we’re guessing you’re either one of two people.

1. You’re here cause you’ve got a 420-friendly personality and need to know all the marijuana emoji variations so you can use them when chatting with your friends.

Luckily, Puff Pass and Paint has created the most extensive list of marijuana and cannabis-inspired emojis. We will start with the more common weed emojis and then move on to the more creative 420 emoji sentences that have been gaining traction over the past few years.

Let us begin with the most common weed and marijuana emojis.

Even as cannabis becomes legalized and gains popularity, there is no emoji to appropriately represent cannabis, such as a cannabis pot leaf emoji. Oftentimes 420-friendly individuals will use two or more emojis in a sequence to accurately detail their thoughts in cannabis culture terminology. Emojis used for marijuana or weed are typically the color green and are associated with leaves or plants.

You might have not known that there are a lot of creative ways to make emoji sentences to describe the type of cannabis you have or are enjoying.

This emoji is perfect to explain when you’re smoking all the little small nugs at the bottom of the jar.

When you can smell the cannabis before you even break it out of the jar.

When the smell of your bud starts sneaking up your whole house.

Use the fire emoji when you have the creme-de-la-creme.

When the weed is trash, just use the wastebasket emoji.

These are our absolute favorite emojis to use when you are lighting up and taking a trip to the moon. You’ll be standing out in all your 420 conversations.

This emoji easily explains that you are beginning the consumption process. Here you are taking flight on your 420 adventure.

For any Kid Cudi lover and those who felt like they’ve been to the moon a few times, this man on the moon emoji is perfect for you.

Even though this is the okay hand symbol, but for many cannabis enthusiasts, you’ll see that the fingers pinching together looks like it is holding a J.

This is the perfect emoji to explain that you plan on hotboxing your car and filling that thing full of smoke.

There are a few different variations of sparking up. You could also use the fireworks and UP emoji.

Sure this emoji so a face signing or dispelling air, but it also has the indication of someone blowing smoke.

This unique emoji provides a way to say it’s 420 without texting 420.

😶‍🌫️ | Face in Clouds
Emoji Name: Head in the Clouds

It’s almost like they made these emojis for us 420-friendly folks. So if your head is in the clouds, just combo these two emojis here.

This emoji allows you to provide a location on where you want to consume your cannabis. You’ll notice in the emoji that there is a tree and a house. Meaning you’ll be smoking tree at home.

This is the second emoji that provides a location on where you want to consume your cannabis. You’ll notice in the emoji that there is a tree and a tent. Meaning you’ll be smoking tree outside.

These are our absolute favorite emojis to use when you are lighting up and taking a trip to the moon. You’ll be standing out in all your 420 conversations.

This is a creative way to explain that you’re higher than a kite.

You get it right. STONEr. This Easter Island Moai head made of stone is the perfect emoji to use for the word stoner.

What else goes best with baked, like a baked pie.

If you’re cooked, fried or crispy, you have to use the egg frying in a pan emoji to explain your stoned state.

If you’re lit, adding the spiral eyes with the fire is the perfect way to say your blazed.

The blunt emoji specifically uses a palm tree. The reason a crown and palm tree is used is because of “King Palms” which references a specific blunt wrap brand name.

Too bad there is no beaker emoji (just test tubes), but use the alembic to get your point across.

When you’re smoking bowls, just use any marijuana emoji with the blue bowl and spoon to get your point across.

Combine any of the marijuana emojis with the hospital to explain that you’re going to the dispensary.

Use this emoji to describe that you’re back at the crib rolling up and getting ready to smoke.

A unique way to explain that you’re getting marijuana from your dispensary or weed man.

Do you have other 420 emoji ideas that you think we should include? Reach out and let us know!